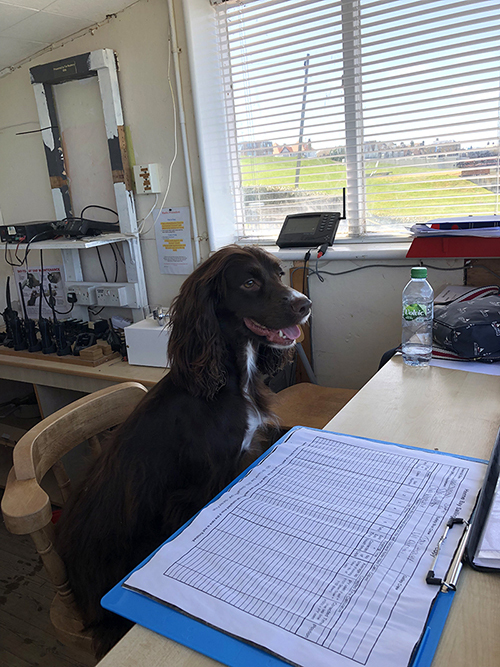 It all looked so good whilst everyone was rigging, the wind filling in nicely to the force 3 to 4 that the forecast had suggested, and a constant easterly wind. What's not to like??? I believe it was the first visit of Becky McNeil, Allan's daughter to the race circuit this year and a flat sea with a high tide should have been marvellous.Dai Griffiths was Race Officer, with Gil Reece as assistant and Hattie, Roisin's cocker spaniel being our extra pair of eyes until Bill Phillips arrived.

Everything was going to plan until just after the start sequence was sounded and the wind just died. It took 5 minutes before the first boat sailed by Russell Kyte crossed the line. Even the 29er was steadily drifting down to Hampton Pier to see how their race was going. Then some gentle zephyrs appeared on the water and boats started to follow Russel to the windward mark. This is every Race Officer's nightmare and even Hattie was concerned as she chewed on her bone. Only two laps were completed before we hooted twice and flew the shortened course flag.

During the break between the first and second race the wind filled in and made for some great racing. The Dyer boys, Sam and Michael, along with Laurie and Jo in the 2000 were over the line at the start and the individual recall flag was hoisted. Hattie sprung to attention as we hooted to let the competitions know. Laurie was fuming and apparently was going to protest the Race Officer as there was no transit Triangle above the starters cabin so he couldn't tell if he was over the line or not. His protest would have been in vein when he remembered that the said triangle is in his garage waiting to be painted. This however spurred him on and having returned to the start line to restart he sailed like man possessed to win the second race, with all of the laser fleet finishing within seconds of each other.

Thanks to Tony Herlihy and Roisin in the safety boat, to Gil Reece having survived her first duty in the race cabin as assistant, to Bill Phillips for making sure that everything remained calm throughout proceedings and to Hattie for just being Hattie!