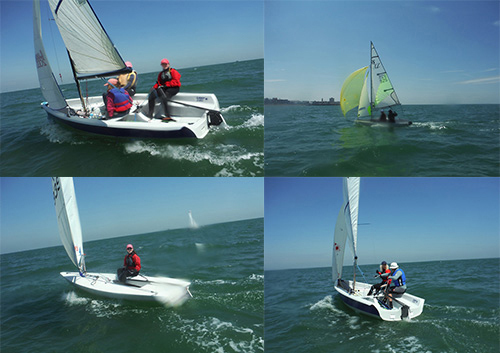 A gorgeous jubilee day brought a handful of fresh faced innocents to the newly repaired slipway. They put their trust in our intrepid experienced helms on a day when the wind was coming in from the north-east at a Force 4 on a rising tide.

They did not falter even though the spinnaker instructions were but whispered belatedly as they bumped through the waves towards the startline.

A set of 4 short races were raced over a trapezium course with a testing beat into wind and tide. Jo Norrington took the plucky Pole, Magdalena, in a Feva. I should have said "a plucky Jo". Anyway they had a great time and perfected their capsize technique during the 4 races.

Meanwhile at the front of the fleet Laurie, with Gillian and then Anna , established an unassailable lead in the first two races with Scarlet helming the 2000 and crewed by Colin and Erin(first timer) following them home.

In the last 2 Races Gary got the hang of sailing the club's 2000 and with Fiona's expert crewing sqeezed Laurie's 2000 into 2nd place.

Russell, in his 2000, and Peter were consistent. After being OCS in race 1 he may have tacked out into the stronger tide too soon in R2 but improved in the next one to bag a third.

After discards Gary was just pipped by Laurie by a single point.

Thanks to Dave and Jenj for roasties and sausages and Adrian and Ian for SB (and photos).

It was an excellent event and all the novices gained good experience in wind strengths outside their norm and some proper racing.

Thanks by the way to Russ and team for fixing the slip and to Jon and Carrie who have scrubbed it for us.